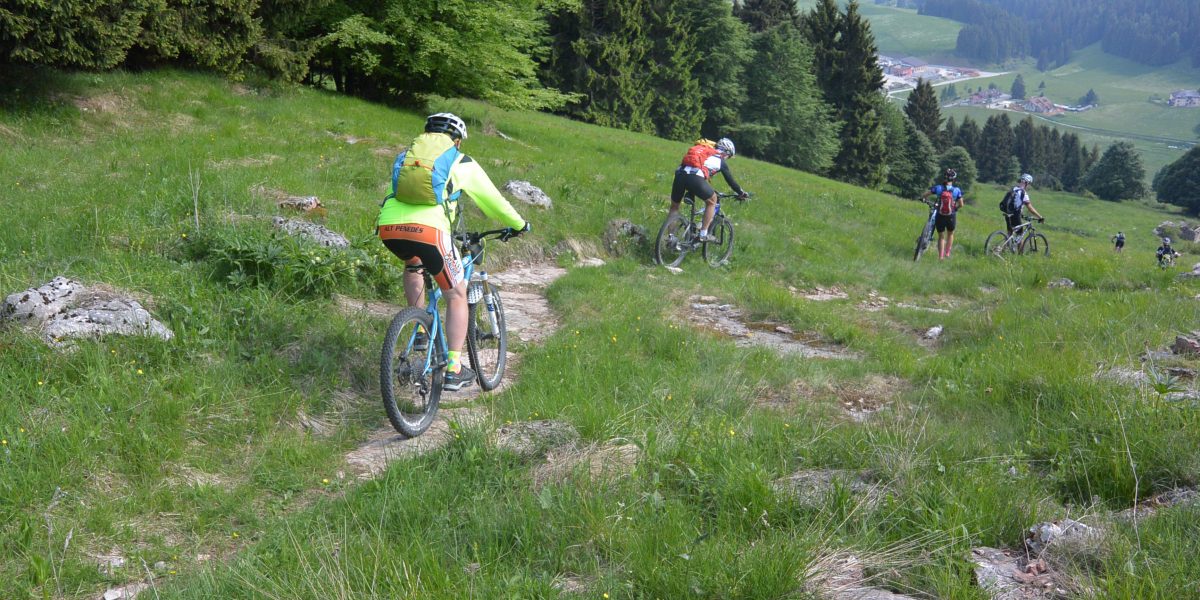 The highland fling has taught me that anything involving Huw Kingston would be a challenge full of surprises.

Signing up for Biking-the-boot was a commitment to unknowns; would I be fit enough for big rides on consecutive days? How technical? Maybe I’m a reasonable XC rider but I know I’m rubbish DH. Will my XC 100mm dualie be suitable? What gearing? Unpredictable alpine weather, what clothing? What about the other people? Will we get on? Will my roomie snore?

Although work travel and Sydney weather completely trashed the MTB training plan, I was in reasonable shape from roadwork, lost a few kg and could sustain climbing reasonably steep loose rocky pinches around the Cascades. I was as good as it gets.

The 29” Spesh Epic was set up as a pure XCM race bike. I kinda knew it was not going to cut it for consecutive big days with more technical terrain than a manicured marathon course, steep long climbs and descents. Added a dropper post, a 180mm disk up front along with an aggressive 2.35” Ground Control on the front and a wider 2.2” Fast Track on the back. Before the Dolomites I swapped sintered for organic brake pads.

I’d never ridden a MTB on a climb longer than up the oaks trail. I was completely naïve, I thought that a 30t chainring was ridiculously small till I heard Huw was running a 28t, could I pedal fast enough to stay upright? I eventually settled on 28t x 10-46 (Shimano 11-46 with a OneUp sharktooth) and practiced riding steep climbs without falling over.

I knew Huw and the Doctor from darksiding at the fling, the other 6 were unknowns… by day 2, I felt like I had known them for years, every day was just like going for a ride with your mates – similar skills, experience. A shared appreciation of; riding, food, beer, wine, grappa… camaraderie, joking, Huw’s non-stop entertainment, laughing… at and with each other… what a great bunch of people. And, my roomie Russ McEpic didn’t snore. Mark, joined us part way through and fitted straight in – particularly his ability to hassle Huw. Snow White performed admirably, super strong on the climbs and putting up with the 8 dwarfs. Liam and I bonded over our appreciation of artisan beers on day 1.

Of course there was competition – competition to avoid the Caca for doing something stupid.

Snow White, McEpic and Mark were easily the strongest climbers, we all had our off days.

The food and drink throughout the tour was fantastic. Even on the first day – could it get any better than this? The Rieti Cheese, Sausage and Beer festival, drinking MacCardi Saison.

The gelato, everywhere the gelato was great, Montone, Brisighella, Arrone…

After a long hard day, just sitting outside the Adler Café on the piazza in Assiago, watching the locals, drinking just too much of the Ovest… while the bartender, on her first day, bobbed and fussed around us… wonderful.

We were all there to ride, and the riding was fantastic. Every day was something different, we started out relatively easy and ramped it up pretty quickly – in their own way every day was a challenge. Some days were technical; the “Roman road” down to Campigna had me on my limit, fast-n-twisty, surprise drains, culverts, rocks, bridges… The level of concentration at the end of the day when the light was fading…

An excursion over the bars on the rocky Sellaronda hero just before the Poidoi pass resulted in a split lip, my bike hooked up in a tree 1m below me and a water bottle in a tree 5m below, then an afternoon in the sag wagon with Fabrizio.

Looking back some days stand out: The railtrail tunnels to Spoletto, riding 2.4km of tunnel to find the gate locked, then riding back again; the single track through the beech forests outside La Verna absolutely beautiful; the fast, flowy fango descent on the way to Gubbio, riding along the cliffs of Murraglione, splashing through the river crossings of Aquacceta.

The mesmerizing jagged peaks of the Dolomiti creating the spectacular scenery on the first day out of Cortina.

After a day of hard grinding up loose rocky pinches climbing up to the Poggio Scali, probably because we had worked so hard to get there, head down pounding away… then finally turning around and looking up to see the spectacular view – just blew me away.

Looking back, not a lot went wrong, a few mechanicals; broke a chain. By the end the BB, headset and freehub bearings were all cactus, but they made it to Riva del Garda. Some of the grappa wasn’t great.

By the end, the unpredictable Italian weather furnished 21 days of perfect blue skies with one afternoon storm that occurred while we were inside the railtrail tunnels on the way to . I packed 2kg of warm gear that I didn’t use. I claim the fantastic weather is due to an earlier chat with this guy à

Although the scenery was spectacular, the small villages, the old $hit everywhere, this was not a sightseeing tour, it’s a multistage event.

If you can train to ride a full fling, you will have the holiday of a lifetime.