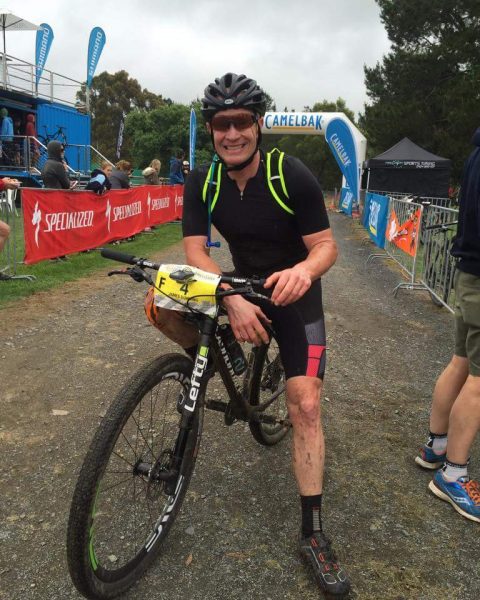 I’ve had a really decent run of bike traveling experience of late. 2 weekends ago I jumped on a plane and went up to Sydney for the weekend to hang out with family. Of course, being prime race season, I took my bike and hooked up with Anthony Shippard and Guy Frail to do both the Coluzzi bunches offered on Saturday and Sunday. One good thing about traveling with the bike is that there is always a bunch ride on in any city that you visit. I also got the opportunity to ride across the Sydney Harbour Bridge on the road…”meet us on the city side of the bridge” Ships said…so I rode in that general direction. The flash of the e-Tag being the main indicator that I probably should not have been on the road! But, I did manage to get the fastest Strava segment across there for the day 😉

The following weekend it was back aboard the metal bird to Brisvegas for the Bayview Blast XCM. This was such a great event and I am really glad that I went to it. It was way more humid than Bangkok ever was and it was also hot. Damn hot. But, that is one the things that attracts me to bike racing. You are constantly testing yourself against the track, the elements, the weather as well as the other competitors….it’s never the same and that is the beauty of it. Highlights of that trip include catching up with family, hanging out with friends and eating a huge amount of Thai and Japanese food. The bike racing thing went pretty well also. With a few issues had on the day, I still managed to get through and post a 4th place position and claim 4th in the National XCM Series.

So, getting to the point of the post, the Highland Fling is the last round of the Maverick XCM Series – which is a best 3 of 4 rounds series. This started way back in March with the Capital Punishment in Canberra (4th place) and took me to The Giant Odyssey in Forrest, Victoria (10th place) and the Flight Centre Epic in Queensland (4th place). Again, one of the best things about the bike racing is enjoying the entire journey that it takes you on. When you think about it, the actual racing is less than 5 hours over the course of a few days over a weekend. It is therefore, imperative to try and enjoy everything else that is going on in the town that you are in or are traveling through.

I’ve done the Fling 5 times now with a myriad of results along the lines of 7th, 8th, 9th 11th – it is hard. Does it suit me? I don’t know for sure. I always feel like I struggle here. The pace is intensely fast. The hills endless, the singletrack requires immense focus, it is either boiling hot, or cold and wet. But with a bit of experience in how the Fling is raced I know a few things….the start is fast. It doesn’t matter who turns up but the first hour is mental. You need lots of food on the bike to restock what energy you do use to propel the bike forward. And you need to know a few landmarks around the traps.

The morning started off being pretty cold. This is great for marathon racing. You can push as hard as you want as you are not going to overheat. When racing was underway, the start was mellow, until the 2nd corner when someone ramped it and strung it all out. Then it went back to mellow. Then it went full on for a bit….this pretty much continued for about 30 minutes! And no doubt kept going like that all the way to the first transition. I pulled the parachute out after about 30 minutes and rode with Matt Rizutto until the end of the 1ststage before the neutral section. Anthony Shippard,  Kyle Ward, Dylan Cooper and Andy Blair were driving it full gas. There were some definite team tactics in play as well as some not so obvious ones that may have been only known about through Facebook Messenger! LOL 😉

Matt and I were rolling up past a paddock of cows that were a little agitated by all of the people in activewear riding past them on bicycles. Like most crowds there is always one….and that cow smashed through the barb wired fence as Matt and I came to a screeching halt as another 30 followed suit. Then the rest of the herd ran up the fence for 30 metres and proceeded to break through another part of the fence to roam free with their bovine friends. This afforded Matt and I a slight recovery session of about 45 seconds. We had a good laugh and kept pressing on.

The Highland Fling has 2 untimed sections 30 and 80km approximately – give or take. 5 minutes to cross the train tracks — if you need more details check their website! I won’t go into too much detail.

Anyway, at this stage we were 2 and half minutes down on Kyle Ward Brother #1 ™ so I grabbed some fluids and a some gels and got the hell out of Wingello. I leapfrogged a few age group trains getting dragged along the hauling ass fireroad nicely before spearing off into the singletrack. Through Wingello there is a pine forest that has some pretty awesome singeltrack. You are a little baked from racing so hard, but it is still a bit of a treat. The standout section for me is a freaking awesome section that descends forever through a series of monster berms until you are in an oasis of ferns crossing a rocky creek flowing gently. It is incredible and it then gently climbs switchbacking © its way out of there. It would be really good to go back there and play when the body and mind were fresh!

At this stage I was probably 40km in to the race. I had no idea where anyone was as they were either up the road or behind me. All I can keep doing is moving forward. The first contact I got was from Cam Ivory who had suffered a flat tyre about 10km in. He was on a mission to get back up the front and motored past me. At the 50km mark I rode past Tristan Ward who was in a dark place, lights totally out, creeping. I yelled a full on redneck YIEEEEEEW for his appreciation as I went past.  At 65km I saw Ed Bissaker’s colours and it took 5 km to get onto his wheel but it came at a very fortuitous location – at the 70km section which is the long open section of farm road into Wingello. This is where we found Seb Jayne, XC whippet creeping along. I gave him a cheery hello….I may have actually yelled out “What’s up dawg” in my best Xibit impersonation as we motored past him! Sorrynotsorry Seb! But you did get 10km extra from where I caught you last year! Thank God I don’t race XC against you!

We hauled ass along and just before we turned into the final transition timing section we saw Cam Ivory. The good thing about the transition is that you can get more food and drink and then regroup. We were fortunate to get a group of 4 together, Cam, Ed, myself and a Sydney XC team dude. We motored along the wide rolling turns with the flick of an elbow to keep each other company and keep the pace high progressing through this last section.

This last section is pretty full on. For starters it is 30km….and that is with 80km of some pretty hard racing in your legs. It has a real mixture of terrain. Fast fireroad sections, long slogs up hill, techy singletrack and this year….mud so thick it would make a euro cyclocrosser lick their lips in anticipation.

At about the 85km mark, Cam did a turn on the front that broke Ed and he had to pull the ripcord and back it off. Cam was starting to pay for the post flat tyre fix chase on and about 2 minutes later backed it off. I asked if he was ok, and he replied that there was not enough training in the legs. After winning the Bundanoon Dash the day before, and chasing back on for 70km, I think that he was probably just cooked a little. I rode off in search of the last sections and anyone else I could find.

Getting through to the last bit of the singletrack around the base of the Brokeback Mountain region was a significant milestone. You are about 10km from home here…but it seems to take forever. But you know the landmarks, and you keep ticking them off as you get through them. I jumped on Ben May’s wheel through the fast straight line singletrack prior to the huge creek crossing before the hill which featured a choirgirl set at the top!

The next bit of singletrack is quite technical and takes a lot of focus to ride through when you have 95km of racing in you. So you actually have to concentrate pretty hard through here! I spied Anthony Shippard off in the distance and it took a while to catch him. When I went past him I asked him if the tactics had worked out for Ward Bro ™ #1. He said that he hoped so. As I rounded it in past the farm, I had a kilometre to go and found Kyle creeping. A mechanical had thwarted his hopes of victory and we had a good discussion about it all as we rolled the last 900 metres crossing the line after a pretty tough day out on the trails.

With the Fling, you don’t really know where you really ended up. I crossed the line in 6th place, but the retrospective calculations taking into account the untimed sections need to be sorted. After a 30 minute wait I did find out that I had crossed for 6th place. Now there was also the small fact of the Maverick Series placings as well. The math had been done in the last week with the myriad of possible scenarios that could have played out. The series gives points based on placing and time based off of the 1st rider home. So, I used caution and calculated conservatively where the placings would end up. With the placings on the day, I ended up 3rd in that series with a 4th, 4th and a 6th giving me the consistent points for the series overall.

The best thing about the Highland Fling is the atmosphere. You could also tell that more than a few people were a little more chilled after this race. The fact that it is the annual XCM season closer means that people could afford to simply chill out and enjoy the atmosphere in the event village, talk some crap about the day’s events, and soak in the sun that popped out for about 5 minutes!

So what is next? Not sure…I’m just going to keep on enjoying riding my bike!